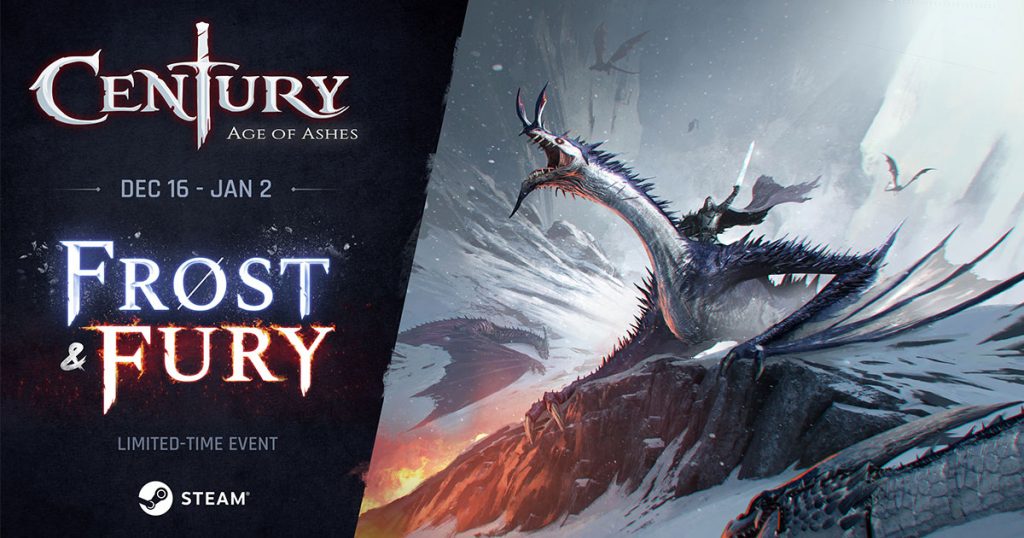 The Frost and Fury event brings a limited-time mode, festive map, and themed rewards to the Century community. Survival of the fittest takes an extreme twist in “Frost and Fury”, an 8 player free-for-all battle.

After now two weeks since the release of Century: Age of Ashes, we are glad to announce that the 500,000 downloads milestones have been reached (and surpassed). We want to thanks all the players who took flight during our first weeks.

FROST AND FURY FREE FOR ALL MODE – 8 PLAYERS

Battle against 7 other riders and take down as many opponents as you can in the given time—but be careful, each kill puts a stackable Bounty on your head and make you a more profitable target if killed. Max out your Bounty to consume it and deny extra points to other riders!

Since Windguards wouldn’t want to support enemies on the battlefield, the Chaos game mode also changes the behaviour of their Salvation Surge ability granting their dragon a speed boost for a short duration on activation. At the end of the Salvation Surge dash, a shield buff is added to the rider.Riders who prove their superiority by completing all Frost and Fury challenges will be rewarded the Strandwarden Ensemble,an outfit worn by one of the most chronicled Windguard corps in the kingdom, as well as the Faraway Floes dragon, a majestic beast known to befriend those who sail the glacial southern seas.

Additionally, riders in search of new beasts to tame will be able to purchase three exclusive dragons during the Frost and Fury event:

The time has come to unleash your fury against other dragoneers and survive the frozen winds of Valkür. See you in the skies!